What Is Concrete Delamination & How Can I Prevent It? 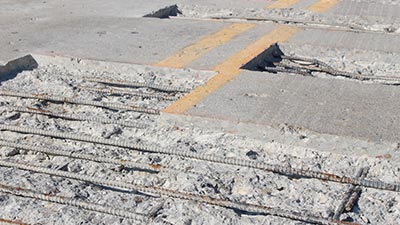 Concrete delamination is the separation of the paste layer at the surface, creating an unbonded concrete layer between there and the slab body. This issue develops with troweled concrete, commonly during the early spring and late fall with concrete placement on a cool subgrade. Though it’s primarily driven by rising daytime temperatures, the separation may happen at any time depending on the concrete characteristics and which finishing practices were used.

What Part Of The Concrete Is Affected By Delamination?

Usually, it’s the top 1/8- to 1/4-inch which densifies. This is mostly due to premature and improper finishing and a thin layer of air or water causing the separation. An affected area may range in size depending on the severity of the delamination, from several square inches to square feet.

Cracking and color differences commonly develop on the surface when the thin surface dries too rapidly during the curing process. Conversely, freezing and/or traffic may cause large pieces of the surface to break away.

Densifying or sealing a fresh concrete surface by troweling while the underlying concrete is plastic and is bleeding and/or releasing air. While delaminations generally form after floating and the first troweling pass, they can develop during the floating step if the fresh surface is overworked and densified.

The risk of delaminated concrete increases when conditions for rapid drying of the surface are present, such as low humidity, sun, and wind. This is because the conditions cause the surface to appear ready for troweling when in fact the concrete below is still plastic.

When the initial setting of the concrete is delayed, and rate of bleeding reduced, the chances for delaminations increases. While they can occur under a range of circumstances, it’s more common when these nine factors are present:

This situation happens when reinforcing steel in the upper layer rusts which breaks the bonding between the steel and surrounding concrete. It’s more apt to occur with a thin concrete cover and with permeable concrete which allows chloride penetration to the steel layer.

How Can I Prevent Concrete Delamination & Spalling?

In cooler weather, accelerators or heated concrete are widely known to stop delamination from occurring.

Hesitate To Trowel A Surface Sooner Than Usual

If it appears a concrete surface is ready to be troweled sooner than is usually expected, beware. When finishing concrete, keep the focus on screeding, straight-edging, and floating the surface as fast as possible but without creating extra mortar layer and sealing the surface layer. Keep the float blades flat during the initial floating. This prevents premature surface densification.

Delayed finishing produces a smooth final surface. Remember to keep the surface covered, such as with polyethylene, to prevent evaporation.

Use A Granular Fill With A Vapor Retarder

When a vapor retarder is necessary, at least four inches of a compactible, trimmable granular fill between the concrete and retarder. Sand shouldn’t be used. The only time a concrete surface should be placed directly on a vapor retarder is when placing a moisture-sensitive floor covering on interior slabs.

This generally applies to hard troweled surfaces and/or surfaces not subjected to either freeze-thaw cycles or a deicing salt application. If entrained air is necessary in the mixture, avoid using more than three percent air content.

Can I Repair A Delaminated Concrete Surface?

Yes. Patching is performed after removing the surface layer and thoroughly cleaning the underlying concrete. Grinding and laying a new surface may be necessary for extensive delamination. When steel corrosion is the culprit, sandblasting the steel is necessary for proper rust removal.

If the substrate temperature is less than 40 degrees Fahrenheit, don’t place the concrete.