What Is Low Concrete Cylinder Strength? 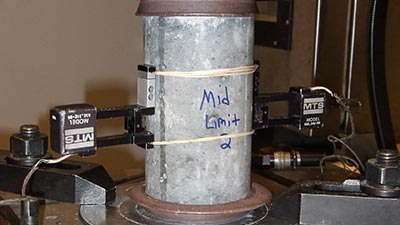 Generally, the process begins by molding a fresh concrete sample and allowing the sample to cure in standardized conditions. Testing takes place at a pre-specified time, usually 28 days after molding, with all procedures performed following ASTM standards. It’s done with two or three cylinders formed from the same concrete sample.  Although testing is sometimes done on cylinders after seven days for an early indication of potential strength, the results shouldn’t be used for concrete acceptance.

How Common Are Low Strength Results?

When the mixtures are appropriately proportioned to meet the standard requirements — as outlined in the ACI Building Code ACI 318, and the Standard Specifications for Structural Concrete ACI 301 — low strength results only happen one to two times in 100 tests because of normal variability.

If the specified strength is less than 5,000 psi, it’s considered acceptable and compliant if:

Low strength concrete is frequently linked to an error during production, such as adding too much water to offset placement delays or because of a customer request for wet concrete. Another common error is too much air content for the design mix.

This also includes curing and testing any cylinder and generally causes most low strength results.

What Can I Do About Low Test Results?

Most of all, gather all test results and examine the data. Look for patterns in the results and ask these two questions:

Keep in mind the strength range for two to three cylinders, taken from the same sample, shouldn’t surpass 8 percent or 9.5 percent. If deviations are present, examine:

After verifying the accuracy, compare the measured strength to structural requirements. Examining the in-place strength isn’t needed if there’s deficient testing or a greater than necessary strength is present. Yet, consider further investigation if the procedures correspond with the standards and strength specified as a requirement of the section.

Although minor defects which develop during cylinder curing under moderate weather conditions generally don’t affect the overall strength, major defects may. This includes nearly every handling and testing defect along with a combination of factors, such as:

It’s crucial to expect accountability from the lab if their procedures ultimately cause defects and/or issues. The lab should have certified field-testing technicians and employees — any employee or worker not trained in concrete testing should not be allowed to make and/or handle the cylinders.

Before choosing a laboratory, make sure the lab is:

How To Create Standard Cylinder Tests

Thoroughly examine the failure pattern. Vertical cracks through the cap or chipping off the side demonstrate improper load distribution.