Why Concrete Blisters Form & How To Avoid Them 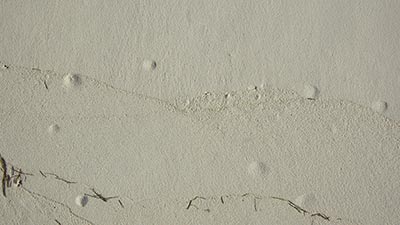 What Is Blistering Concrete?

Akin to the type of skin irritation, concrete blisters are hollow, inconspicuous nodules on a concrete surface. Though they’re generally small, usually dime-sized in diameter up to one inch, blisters can grow up to three inches in diameter depending on the situation.

Why Does Concrete Blistering Happen?

It begins when either bleed water or bubbles of entrapped air move through the concrete and are unable to escape the surface. Usually the surface was sealed too early during finishing, resulting in the hidden voids of air and bleed water underneath the mortar skin. While it’s possible for the blisters to develop soon after finishing, they can be difficult to identify in dim and/or poorly lit areas. In this case, the blisters are only detected when they break open after the concrete has cured, frequently under the weight of traffic.

Although blisters are a common cause for delamination of concrete, it’s important to avoid the formation in the first place. It’s generally difficult to repair this defect and other types of concrete defects after the surface hardens. Common factors include:

With inadequate vibration, entrapped air can’t be released whereas vibrating the screeds too much causes a thick layer of mortar on the surface.

Use Of An Improper Floating Tool

It’s important to test the surface to make sure you’re using the right tool, such as a wood or magnesium bull float, for the surface. Otherwise, an improper floating tool can’t seal the surface which leads to further concrete issues.

When this happens, the surface appears to be ready for final finishing, but the concrete continues to release bleed water and entrapped air. It’s a major problem when the surrounding environment experiences:

Whether the entrained air is used or at a higher than normal level, it significantly reduces the quantity and rate of bleed water inside the concrete. In turn, the concrete looks as if it’s ready to be floated and finished but doing so would produce premature finishing.

The temperature difference causes the surface to set at a faster rate than the bottom concrete, frequently resulting in a premature finish.

When the slab thickness exceeds an ideal depth, the bleed water and entrapped air need more time to rise to the surface. This delays overall curing and finishing.

This situation usually arises when there’s a higher content of cementitious materials or excessive fines in the sand, causing less bleeding and at a slower rate. Yet, lower content levels allow for more rapid bleeding during a shorter time frame but the concrete has a higher total amount of bleeding thus delaying the finish.

This commonly happens with air-entrained concrete.

Placing The Slab On An Impervious Base

Placing a concrete slab over an impervious base, such as a vapor retarder, which prevents the subgrade from absorbing the bleed water.

Can I Prevent Concrete Blisters?

Yes. Use caution if a concrete surface appears to be ready for finishing ahead of the predicted timeline. Any finishing operations should focus on:

Once these steps are complete, delay any further finishing if possible. Protect the surface from evaporation with a covering, such as polyethylene. In a situation where high evaporation rates are present, cover a small part of the slab to assess if bleeding is present.

During the initial floating, make sure the float blades are flat which avoids premature densification of the surface. In cool weather, using an accelerating admixture or heated concrete frequently prevents blister formation. Also, it’s recommended to use non-air entrained concrete for interior slabs, but not to steel trowel any air entrained concrete.

What Can I Do If Concrete Blisters Form?

Generally, there are two options to choose from. You can flatten the trowel blades or use a wood float to rip the surface then stall finishing as long as possible. If the current conditions cause rapid evaporation, the rate may be slowed between finishing steps by: